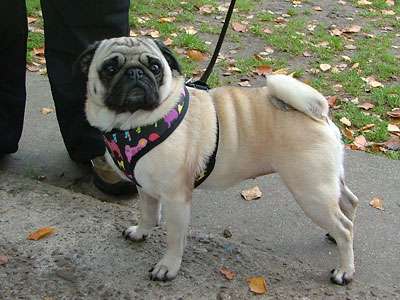 Pugs are easily recognisable small dogs with a distinctive short snub nose and a classic under-bite. They are stocky animals, with short, thick coats and short curly tails. They are popular with owners, partly due to the prevalence of pugs in popular culture and partly due to the affectionate and sociable nature of the dogs themselves.

Pugs are believed to have originated in the Orient, where small, snub-nosed dogs were very popular. The breed was carried to the Netherlands by vessels associated with the Dutch East India Trading Company as early as the 1500s, where it rapidly gained popularity with the royal house of the time. From this affinity with the royals, pugs were seen as being a symbol of royalist patriotic devotion, almost the polar ‘opposite’ of the keeshond which was more associated with ‘commoner’ patriots. Fondness for the breed slowly spread across Europe and even reached the British royal family when William III came to the throne. Napoleon once attempted (on their wedding night) to ban his wife, Josephine’s, pug, Fortune, from their bed, only to be told that if the dog did not sleep in the bed, neither would she!

Pugs are excellent family dogs, getting on well with children and the elderly alike. Being short-legged dogs they only need around 30 minutes of exercise per day. This makes them suited to apartment living but in the case of them having no access to a yard or garden daily walks are a must. They can be fussy eaters, but this is not a breed-specific issue, depending on the individual. Due to their small size, pugs are included in the ‘toy’ category and are often lapdogs, living indoors for much of the time.

Despite their relatively low exercise needs, pugs are often boisterous and playful, enjoying interaction with other pets and humans. Much like children who constantly test the boundaries set by their parents, pugs will try their limits too, being intelligent enough to pick up on weakness or uncertainty in commands given by their owners. They respond best to firm, confident and calm commands, and seldom need more admonishment than a very firm tone of voice. They are affectionate and sociable animals and will often follow their humans from room to room rather than stay alone for any length of time.

Physically, pugs are short legged, compact and more sturdy than their predecessors which tended to be leaner. Initially, they were only known in Europe and the UK in fawn, sometimes with black or brown points. In 1877 a black pair of pugs was introduced to the UK from China and the palette has grown over the years to now include apricot and silver as well as the traditional fawn and black. The tails curl is highly prized, with two full spirals being highly desirable in shows. Their eyes are large and slightly protuberant, which, combined with their deep-set facial wrinkles gives the pugs an attractive quizzical look. Their ears come in two shapes: rose and button, with button being prized for breeding and showing purposes.

Pugs can suffer from health problems, especially due to their excessively short noses and prominent eyes, the latter being caused by an inadequate brow ridge. These issues make the dogs susceptible to eye injuries and respiratory problems, with frequent colds being a known pug problem. They do not regulate their body temperatures well (possibly due to their small size) and should never be exposed to great extremes of heat or cold. Pugs with respiratory issues should not be transported by air as some specimens of snub nosed dogs have died due to the stress and trauma of flying in combination with temperature fluctuations and breathing problems. Another issue faced by especially sedentary pugs is that of obesity. They can and do overeat and need some brisk exercise every day to keep them in good condition.