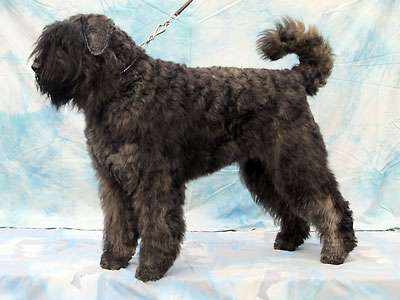 Although this friendly dog started life as primarily a working dog, these days it is often found in the home. The original Belgian bloodlines tend to be slightly smaller and lighter than the newer Dutch bloodlines.

The Bouvier des Flandres is a large and powerful breed with a square profile provided by the head being proportion with the body. The back is broad and rather short, while the flat head is slightly longer than wide. The muzzle is wide in between the ears, broad, strong and slightly tapered. The breed features a black nose and bushy eyebrows, while the teeth form a scissors bite. The dark brown eyes are particularly distinctive, as they feature prominent black eye rims, while the breed’s triangular ears are high and are either left natural or cropped, although cropping is illegal in Europe. The back legs are well-muscled and powerful, while the front legs are straight. The Bouvier des Flandres features a rough, weather-resistant double coat that has harsh outer hairs. The breed gets its distinctive look from its shaggy, thick eyebrows and beard, while the coat comes in a range of colours including fawn, black, blonde, gray, salt and pepper or brindle.

This breed has a pleasant temperament and is obedient and loyal when well trained from a young age.

Although the Bouvier des Flandres has a very high pain threshold, the breed is prone to eye problems like cataracts and hip dysplasia. This breed can have problems with flatulence, especially if its diet is not closely controlled.

The Bouvier des Flandres is very adaptable and can do well in virtually any type environment as long as it receives plenty of exercise. However, this breed tends to remain inactive if kept indoors and flourishes in a large yard or other type of outdoor area.

The Bouvier des Flandres is an active and energetic dog that requires brisk daily walks. The breed must be made to heel while being walked on a lead so that it does not try to take the lead and assume the place at the head of the pack. When the breed is growing it is important to regulate exercise to walking only so that bones, muscles and joints that are still growing do not become over stressed. The breed requires a lot of grooming as well as bathing or the application of dry shampoo when necessary. The coat of the Bouvier des Flandres must be trimmed three or more times a year, while excess hair on the feet and inside the ears must also be trimmed regularly.