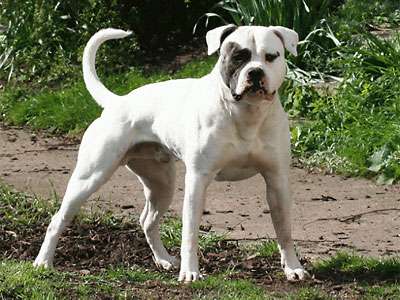 Modern breeders and trainers of the American Bulldog have John D. Johnson of Summerville, Georgia to thank for its continued existence. Having brought it back from the brink of extinction, he devoted his life to bringing up their numbers. The characteristic loyalty and bravery of this breed, together with its strong protective instincts makes its tendency to slobber a small price to pay for having it as part of a family. An apt description of the American Bulldog would be as having the heart of a pussycat housed in a powerfully muscular frame.

The large head and strong jaws of an American Bulldog combine with a stocky, muscular, yet compact frame that is capable of surprising speed and agility. This has made them the perfect choice of farmers for protecting livestock and driving cattle. Weighing in at anything from 60 to 120 pounds, it generally has a height of 20 to 28 inches at the shoulder. The short coat is predominantly white in colour with brindled or other coloured patches and usually requires little grooming, as shedding is minimal.

As a worker, the American Bulldog displays an impressive amount of stamina and intelligence. Although it is a dominant breed, it is happy to follow a more dominant lead. Trainers and owners who quickly establish themselves as the alpha male will find the dog a quick learner and a devoted follower of instruction. It has a temperament that belies its physical appearance, and is known to be gentle with children, particularly if they are introduced to them at an early age.

Once it has bonded with an individual or family, the American Bulldog is fiercely protective and to this end it has often been known to perform heroic deeds. Early socialising is also recommended if the dog is to co-inhabit with other animals, but its inherent confidence usually manifests as it gets older, which will make the dog far more accepting of sharing.

Developing the American Bulldog’s inherent instinct to obey the commands of an alpha male combined with its confidence and tenacity makes it ideal for guarding or farm work. Their natural athletic abilities also require regular exercise if unused energy is not to become destructive. This breed does best in families willing to spend time in playful pursuits, as they do not enjoy being left alone for lengthy periods.

American Bulldogs are prone to certain health conditions that will require annual preventative measures. Cataracts and hip dysplasia are the primary concerns, but regular eye checks and X-rays will determine whether there are any signs of these conditions having developed, or the possibility of having them develop.

The American Bulldog has traits that require specific methods of training, and to ignore these brings the danger of a pet that seems disobedient and bent on being destructive. Leash training is important because of the size and strength of this breed, but most important is this dog’s need for a strong-minded pack leader. An American Bulldog needs mental and well as physical exercise and without it they could be seen to be temperamental and hard to handle. Taking them to public places on a leash gets them accustomed to attention from strangers. Although they are responsive to a reward system during training, the young dog’s need for its owner’s attention makes ignoring them a far more effective means of housebreaking than the old rolled up newspaper method. Show this dog who is boss in a kind, but emphatic manner and it will offer no resistance to being led.