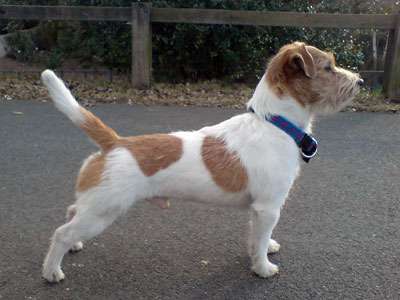 The Jack Russell Terrier is sturdy and tough and features a body length that is in proportion to its height, presenting a compact, balanced image. The head is well balanced and in goof proportion to the body, while the skull is moderately wide at the ears, flat and narrowing to reach the eyes. The stop, is defined, the nose should is black. The jaw is powerful and well boned and comes complete with strongly muscled cheeks. The Jack Russell Terrier features almond-shaped eyes that are dark and full of intelligence and life, while it has small v-shaped ears that are set close to the head. All of the teeth are strong, with the upper teeth slightly overlapping the lower teeth. The chest is narrow and shallow, with the front legs set fairly closely together to give an athletic appearance. The breed’s coat is smooth and predominately white with black, brown or tan markings.

When relaxed, the Jack Russell Terrier is a devoted, cheerful and loving dog, making it a good family pet. The breed is both obedient and spirited, while being completely fearless. This breed loves playing games, but can be over-spirited and aggressive if not well trained from an early age. However, if the Jack Russell Terrier is given lots of love and care it will display a sweet nature that makes it the perfect companion for children, especially as it adores playing all sorts of games and has a lot of energy.

The Jack Russell Terrier is prone to join problems such as dislocation of the kneecaps and disease of the hip joints, while it may also suffer from deafness and inherited eye diseases. Mast cell tumours may also be experienced by this breed.

This breed can live in an apartment if it gets enough exercise, although it will do better in a larger living space. The Jack Russell Terrier is fairly hardy and can live outside and spend the daytime in a large yard if desired. the breed’s coat is easy to groom with a firm bristled brush, although it should only be bathed when necessary.

The Jack Russell Terrier is very sociable and makes a good companion. It prefers to be among people or other dogs rather than being left alone and requires a lot of attention as well as plenty of exercise. This breed can get bored easily, so it should be entertained with ball games and taken on regular long walks.