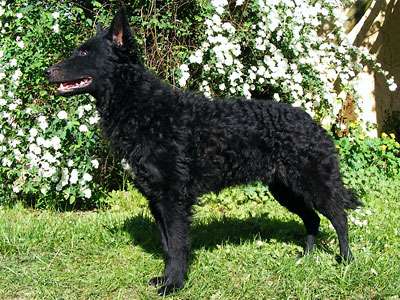 This rare breed has largely been preserved due to the care and attention of dedicated dog breeders.

The Mudi is actually named the Canis Ovilis Fenyesi after Dr. Dezso Fenyesi, who distinguished the breed from the Pumi and the Puli in the 1930s. This is a type of Hungarian herdsman’s dog that formed spontaneously around a hundred years ago and is rather rare, even in its country of origin. The Mudi is often used in Hungary as a sheep and cow herder as well as a guard dog and a hunter of wild animals. They are also used as mountain rescue dogs in Finland.

This breed features a distinctive wedge-shaped head that comes complete with a pointed nose and muscular jaws. The convex skull features a well-marked stop, while the dark brown eyes are oval in shape. Mudi puppies are often born without a tail, while the breed has a straight back that is rather long. The hind legs of the Mudi are rather wide set, while the breed has a deep thorax and erect ears that form the shape of an inverted v. The coat is dense and varies between wavy and curly and is generally around 5cms long. There is almost a limitless range of potential coat colours, including an extremely rare blue-merle colour that is known as cifra and features either dark or light grey that us mixed with black in a striking marbled pattern.

The Mudi’s pleasant temperament combined with a wide range of skills make this an excellent family and working dog. The breed learns extremely quickly and is fearless, making it a great guard dog. The breed tends to form a strong attachment to one person and for this reason should not be left alone for too long, otherwise it has a tendency to suffer from anxiety issues. It is important to socialise the Mudi at an early age so that it becomes accustomed to spending time around people and does not withdraw. If the breed is going to be introduced to other household pets it is essential that this is done from a very early age. Although the Mudi is rarely aggressive, it has a tendency to try to become a pack leader, so the breed should be forced to heel when walking on a lead and disciplined when necessary. If given a firm hand, the Mudi makes a great family dog and enjoys spending time with children, including very young children. The Mudi can learn tricks easily and teaching it tricks is a good way to make sure that it recives mental stimulation.

Although this breed is generally very healthy, a few cases of hip dysplasia have been reported.

The Mudi is comfortable living in an apartment as long as it gets plenty of exercise. However, this breed needs plenty of room and prefers to live outside, especially if it has a large garden or other space to run around in.

This is a very active breed that needs a lot of room to run around. The Mudi needs a daily walk as well as a large area where it can run free in order to remain in top condition. The Mudi loves to play ball games and can be taught to fetch easily. This breed is easy to groom and simply needs brushing and combing from time to time to remove dead hair.