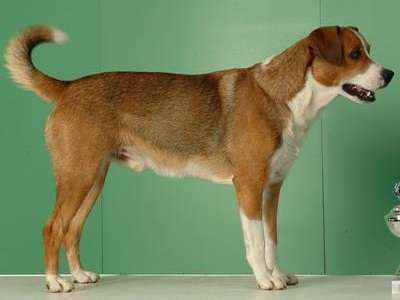 The Austrian Pinscher is sometimes also known as the Austrian Shorthaired Pinscher - or in its native country, simply as the ‘Ö-Pi’! It was formally classified as a breed in the 1920s. However, dogs of this distinctive build, habit and temperament had kept watch over the rural homesteads of their native territory for many years or even centuries before that, their sharp bark and keenly protective sense making them natural choices to patrol and protect.

The Austrian Pinscher at its best

A faithful part of the working farm – and, until recently, a familiar figure there – Austrian Pinschers was originally the classic country dog. Good ratters were particularly highly prized (their name means ‘biter’ in German), but these dogs are capable of deterring the bigger intruders lurking around the hen coop, threatening the flock or prowling around house and home.

These are guard dogs par excellence, relying on the key canine attributes of hearing and smell. Quick to react to unusual sounds in their vicinity, and ready to demonstrate their bravery, they are at their best in environments where this alertness and detection are genuinely needed.

True to the breed’s origins, Austrian Pinschers are happiest when they have room to roam, burning off their energy and putting their agility to good use. Bounding alongside on a gentle bike ride is a good, more high-energy alternative to a regular walk, while they delight in athletic play.

Like most breeds of Pinscher, they are assertive by nature and ideally require experienced owners who know how dogs think and can assert their own personality in a way the dogs can respond to: the occasional habit of pushing or biting is a sign of a frustrated animal that wants more control and consistency. Good, early training can help them to channel their instincts well, and gives them a better chance of reacting more sociably to other dogs or people outside the family or working group. It has been euphemistically said that they prefer to choose their own friends, but once this barrier has been overcome, they are affectionate and demonstrably loyal to their owners.

Of regular proportions but strongly set, and more heavily built than most Pinschers, the Austrian Pinscher is a handsome breed that grows to between 40 and 50 centimetres high at the shoulder.

Its water-resistant coat may range in colour from gold or russet to black. Look out for distinctive white patches on the muzzle, chest and tail, although note that not all animals have these. In short, this is the diversity of appearance that has led some to call the dogs ‘as much a type as a breed’, although loyal owners – and the Austrian Pinscher Club – would disagree!

A breed in danger?

The Austrian Pinscher is not a fashion statement; nor is it a docile breed that automatically accepts city life and humans’ city routines. With its traditional habitat and use fading away, numbers of dogs have unfortunately started to dwindle, and some estimates recently put their numbers as low as 400 animals. However, dog owners in its native Austria – never slow to heed the call of national pride – have shown a renewed loyalty to their Pinschers, while the breed’s official designation as ‘endangered’ has also helped to encourage renewed interest in this lovable dog.