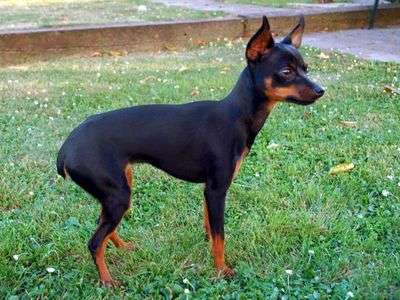 The Prague Ratter or Praszky Krysavik is known as the national dog of the Czech Republic and is believed to be the smallest dog breed in the world. It is only very rarely seen outside its homeland. There its history stretches back hundreds of years. The Prague Ratter was developed solely as a companion dog, being kept mainly by Bohemian aristocrats and kings at the Prague castle, hence its name. Throughout the centuries the Prague Ratter has gradually also moved into the households of ordinary people who mainly kept it in order to hunt down rats and mice. Apart from its exceptional sense of smell and talent for hunting vermin it was also cheap to feed due to its body size and therefore affordable to keep even for the poorer working classes. During state visists the kings of Bohemia introduced them to other European countries as precious gifts. In the 18th and 19th century however, the Prague Ratter was slowly forgotten and nearly became extinct, if it hadn’t been for the efforts of Czech dog enthusiast Theodor Rotter who started selective breeding again in the 1930s. Despite the long tradition of this tiny yet charismatic dog, the Prague Ratter still hasn’t been recognised as an independent breed internationally. Even today the majority of Prague Ratters live in the Czech Republic. The breed does however get more and more popular again in Europa and the United States, especially with people living in cities.

The Prague Ratter strongly resembles the Miniature Pincher, but is slightly smaller. It is of a lean and elegant build with skinny legs and a long, graceful neck. The body is short and firm, the tail is always carried upright and set high. The skull is very delicate and pear-shaped with round, dark brown eyes. The mussle is well developed and resembles that of a fox. The Prague Ratter can reach a shoulder height of up to 23 centimetres and weighs up to 2,6 kilos. Compared to the tiny body, the erect and trinangular ears are very large and set at the far back of the head.
Probably the most distinctive feature of this tiny dog is its very glossy, dark brown or black short coat with tan areas on the cheeks, above the eyebrows, on the chest and the front legs. The fur fits close to the body and appears to be thinner on the head.

The Prague Ratter is known to be very intelligent, lively and alert. As a gentle, loving and highly sociable dog it can easily be kept by families and in single households alike. It is a playful, warm-hearted and patient companion for children of all ages and loves to spend most of its time close to its owners, who it is absolutely devoted to. Although very obedient and easy to train, it needs to be kept by somebody who doens’t treat it like a cuddly toy. Such human induced behaviour can lead to it believing it is the leader of its family unit, which can cause all sorts of problems.

Like the Chihuahua, the Miniature Pincher and other small dog breeds, the Prague Ratter should not be carried around in a handbag, but needs regular exercise to maintain its well-balanced character. Its intelligence makes it an excellent learner who will appreciate all sorts of different activities like agility, coursing and even dog dancing. It is suitable for a life in an apartment, provided it gets to go out every day. Because the Prague Ratter doesn’t cope very well with seperation from its owners, it should not be kept by a single person who spends all day at work.
Due to its short fur the Prague Ratter is very sensitive to cold weather and should be appropriately dressed in harsh winters. Regular grooming is not necessary, but its smooth coat stays shiny and healthy when brushed every other day.